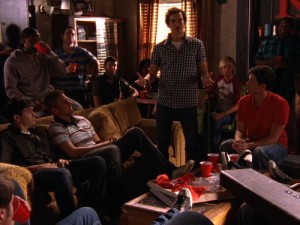 Rusty (Jacob Zachar) fires up the KTs on "Greek"

I didn’t write anything about the fourth season premiere of Greek last week, but I do have a review of last night’s episode, “Fools Rush In,” after the jump.

“I want you to want more for yourself, because you deserve it.”

Casey tells that to Cappie midway through the episode because, despite his efforts to change by actually putting on ΚΤ rush events, he’s doing it to win her back, not because he actually feels a need to change. Cappie growing up (or not) has been a major focus for the show, especially over the last season, but he keeps regressing while Casey moves forward. She, along with Evan and Ashleigh, has graduated, and they’re all moving on to bigger and better things.

Except they’re all still at CRU. Greek has always been much more about the main characters themselves than the environment they’re in — the CRU campus and the Greek system are backdrops for the lives of Casey, Cappie, Evan, Rusty, Ashleigh, Rebecca, Calvin, and Dale specifically — and it would be hard to envision the series transitioning to focus on a new set of characters in the way a show like Friday Night Lights did. The show needs its core cast to stay at CRU, even if it takes some plot machinations to do so.

I’m a bit conflicted, then, on what I think of the fourth (and likely final) season so far. Part of me wishes Greek would take some of its own advice and want more for itself. The way things are turning out, it looks like it will essentially be the same exact show it has been the past three seasons for another year, just with a few different relationship pairings. That show is a good one, but it would be nice to see Greek push itself by fleshing out some of the supporting players and maybe even writing out some old favorites. Then again, “when we try, snakes die,” and Beaver doesn’t need to lose any more pets.

The other part of me, though, is perfectly happy seeing the whole gang still together, even if it means Casey giving up a spot at GW Law School for no real reason, or Ashleigh (presumably) coming back because New York is too fast-paced, or Cappie still refusing to have any aspirations. Near the end of the episode, Tegan talks to Casey about how to stay part of a world you care about, but not be the same person. If the show can find ways for its characters to still be a part of the Greek world, but allow them to evolve and grow at the same time, everything should be fine.

“Change” has always been a prominent theme, especially in Cappie’s story lines, and the best way for it to work story-wise is if the characters not only want it, but also earn it. Tonight, they start to recognize that: Calvin sees he needs to earn his brothers’ trust and the right to be ΩΧ president; Rebecca needs to prove to Tegan that she is trustworthy and can run the ΖΒΖ house; Dale needs to commit to fraternity brotherhood to gain girls’ attention; Rusty needs to change how ΚΤ operates so they can actually attract some pledges; and Cappy needs to truly change for himself so he can win Casey back.

A few of those plots tied up too quickly and didn’t really feel earned (Rebecca’s especially — maybe Charisma Carpenter was only available for one episode), but it was nice to see everyone invested in the changes they were trying to make.

With 60+ episodes at this point, Greek has earned my confidence that it can produce a solid ending to the series over this last ten-episode season. The writers have shown their willingness to try for change, but always revert to the status quo because they need to keep things comfortable and familiar. With an end now in sight, I hope they can commit to it and bring about some real change by the conclusion of their run.

This entry was posted in Greek and tagged ABC Family, Greek, Recap, TV. Bookmark the permalink.